Day one of NamesCon is in the books while day two has brought a full crowd in attendance for one of the most anticipated keynote addresses to be presented at this year’s NamesCon.

But more on that in a moment.

Day two also brings with it awards, the long-standing charity auction and one of the most exhilarating domain auctions on the planet.

Kicking off the 10 o’clock hour, attendees split as if Moses parted NamesCon between two sessions — “How to get Full Value from Your Domain” moderated by Bill Sweetman and panelists, and “Blockchains — Threat or Opportunity for Domains” hosted by Christa Taylor and panelists.

While Stuart Fuller and Tony Kim did their thing in the RegistryOffice Breakout Stage discussing “Domain Economics Transparent Calculation Series: How to Maximize Profits as a Domain Registrar or Reseller”, Zak Muscovitch moderated “The UDRP After 20 Years: Opportunities for Improvement.” alongside four other panelists.

With Aman’s Keynote set to kickoff the second half of NamesCon Day two, not many attendees ventured too far for lunch in fear of missing out on getting a good seat in Keynote Hall.

Fortunately, I stuck around and snagged a front-row-Joe seat, near dead center of the room.

Standing room only though, there were quite a number of GoDaddy staff in the room, alongside many domain investors, developers, partners and suppliers, to hear their fearless leader and CEO, Aman Bhutani, present “Sushi, Onions, and Domain Investors”.

Bhutani was the first CEO from GoDaddy to attend a conference since the days of Bob Parsons.

All ears, eyes, and attention on a laidback, yet very engaging Bhutani. He spoke about the disciple and transparency GoDaddy is investing to empower entrepreneurs everywhere to do what it is they do well, while making an opportunity more inclusive for all.

Bhutani’s Keynote highlighted a number of domain investors present in the room — Peter Askew, Shane Cultra, and Alvin Brown (yours truly), discussing how we each are domain investors, yet we successfully execute unique domain investing strategies.

A key take away Bhutani imparted to all, especially domain investors, was he, as the CEO of GoDaddy, is open to and welcoming feedback to move the industry forward with great hopes of enhancing the image of domain investors to the domain buying audience long term.

Bhutani certainly set the sail for the afternoon.

Time waits for no one, and that was certainly the case with the “Expert Roundtables” — a room full of tables segmented by industry topic. Think speed dating, rather somewhat like group speed domaining or domain investing without time limits and allowing attendees to move about from table to table.

In an abbreviated version of a full Domain Sherpa episode, the gang dissected and gave informative insight about the list of auctions set for their 4:30 PM date on the NamesCon/RightOfTheDot Live Domain Auction block.

Speaking of the auction, there were quite a number of notable domain auction sales on the books, ADD.com led the way at $800K, and Offices.com for $260K and Please.com for $141K.

Overall, 136 domain names were auctioned with 74 sales totaling just over $1.8M, and 62 domains not reaching reserve and headed into extended auction at GoDaddy.

If you’ve never attended a live domain auction at NamesCon, take a quick peek at the video below as Drew Wash bids and wins Earthlings.com.

Rounding out the day 30 minutes prior to auction spanning the evening and night, there were a number tributes — Charlotte (Charlie) Gilbert Memorial, and awards — Lonnie Borck Award, Escrow Awards, and Charity Auction: NamesCon School.

And that folks is a wrap on Day two of NamesCon made in Austin, Texas.

See you back here shortly for Day three recap. That’s all for now!

If I were to start domain investing today…

GoDaddy's Inside Tips and Tricks for Buying Expired Domains

Riches in the Niches with FinTech Domains — Mike Sallese 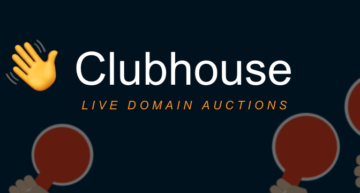 Is Clubhouse the next live domain auction disruptor?