Have you 👀 the new emoji domain names?

You’re likely a bit perplexed by the title, right?

No worries, because you’re not the only one perplexed by finding out that emoji domain names are a reality. 😮

Yes, the silly 😄, 😂, 😜 and other icons, also known as emojis, you send via text, email and across social networks daily.

They are even included in Google search results! Yes, Google has fallen in ❤️❤️❤️ with emojis, and started having mixed emoji results. 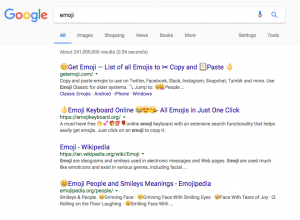 Per Fortune, even GoDaddy is getting in on the act to win over millennials with an emoji search engine for available emoji domains (more on this in a minute).

And if that’s not enough, emojis are set to hit the big screen August 2017 🎥.

For now, emoji’s don’t seem to be going out of style anytime soon.

In fact, they’ve now made their way into the domain world and have caught 🔥.

I was a bit shocked to find out this month as I watched DomainSherpa.com’s interview with Matan Israeli and Jon Roig.

What’s most interesting to me is a growing number of companies over the past couple of years using emojis as a part of their advertising.

Somehow, maybe living in a cave over the last 2 years, I missed that Coca-Cola executed an Emoticoke campaign using the .ws extension (country code extension for Western Samoa).

How is it possible to have an emoji domain name?

Makes you wonder how they’re pulling that off, right? I wondered the same exact thing when I stumbled across the DomainSherpa interview too.

What’s most interesting to me is the use of the .ws extension and not .com.

I’m not certain that all domain extensions allow emojis although it looks like it should be able to using a Punycode or internationalized domain name (IDN) converter.

In short, this convertor is a special encoder used to convert Unicode characters to ASCII, which is a smaller, restricted character set.

So, essentially take the Punycode text and register the domain using any extension.

I encourage you to visit DomainSherpa.com, read “The Definitive Guide to Emoji Domains”, and then head on over to GoDaddy’s ❤️❤️❤️.ws to see what type of emoji combinations you can come up with.

Some perceive the emoji domain names are going to fall along the lines of the QR codes (remember those bad boys!?).

After watching DomainSherpa episode, I argue that emoji domains allow for a unique opportunity to distinguish one’s self from the crowded lot of domains.

I mean think about it for a minute.

It’s easier for a Cloud Security company to promote 🔒☁️.ws (Secure Cloud) or ☁️🔒.ws (Cloud Security) than it is to type it out the words from a mobile or table device.

For instance, I could promote KickstartCommerce.com as 👞💰.ws.

Talk about saving on character and ad space as well as creating a mystique around what’s to be found at 👞💰.ws.

And yes, I too have been bit by the emoji domain bug, registering 👞💰.ws and a handful of others such as🔒☁️.ws and ☁️🔒.ws to name a few. 😂

Nevertheless, one thing to note is that its a bit challenging to add emojis from the desktop if you’re not as familiar with knowing the keystroke commands or shortcuts to make the library appear (especially if you’re not a mac user).  Mac users press Control+Command+Space activates emoji keyboard options.

Another side note to keep in mind is that not all emoji domains translate perfectly as domains like me registering bed and breakfast and breakfast taco.⚠️

I used my iPad when initially checking availability not realizing emoji selections on it and my Mac were a bit different.  It showed up fine on my iPad and GoDaddy stated both emoji domains were available for registration.

Nevertheless, I didn’t check and was surprised when I viewed my domain account and didn’t see the bed or taco emojis as presented on the GoDaddy emoji website.

Also, before you run off and get too clever registering any and every thought that comes to mind, one major consideration to think about is duplicity of emoji domain names. ⚠️

Can a similar emoji domain name express the same thought?

Although emoji domain names are inexpensive to register, you’ll really need to think through and track which emojis are most commonly used on a daily basis.

Just keep in mind and know that you may have to register more than one emoji domain name to capture a business offering, thought (💭) or phrase (💬).

What do emoji domains mean for your business?

Emojis have very much a similar parallel to category-killer .com domains. There are only a limited number of intuitive emoji and emoji domain combinations available.

Which is most intriguing and likely to captivate qualified customers?

The old way of doing things with Shoes.com, or a progressive and universally identifiable use of 👡.ws, 👠.ws, 👢.ws, 👞.ws, or 👟.ws?

Seeing the world has a strong mobile preference and affinity, I personally think emoji domains are going to make a 💪 mark on the domain and business world.

It’s truly a remarkable opportunity to set yourself apart from the crowd, and a reasonable rate that pales in comparison to any other new domain extension offering.

We’ll have to keep an 👀 on this emoji craze as time passes.  That’s all for now!

But do drop me a comment with your thoughts and use your favorite emoji when you do! 😜